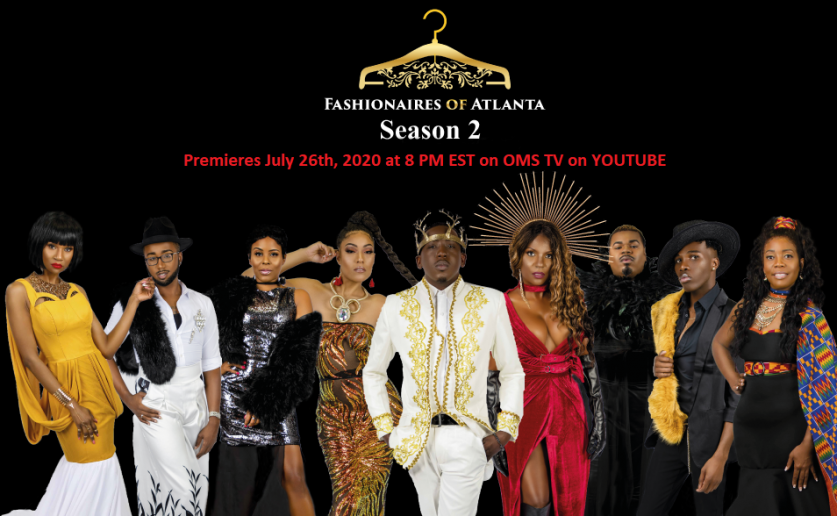 KL Allen, Celebrity Fashion Designer is hard at work trying to make Atlanta Fashion Community the next Fashion Capital while receiving a Creatives Art Grant from the Mayor's Office of Atlanta to produce the 1st Annual Perfection Fashion Week Atlanta. He has just been nominated for the Journey Awards and accepted into New York Fashion Week so he is back and better than ever. As he continues to build his fashion resume, he is plagued with former friends turning to enemies attempting to ruin his brand and reputation. Despite the rumors, he refuses to let anyone stand in his way therefore assembling a new group of individuals he feels will help him propel Atlanta's Fashion Community to the forefront. Will KL and this new group of individuals be able to make Atlanta the next Fashion Capital?

Asia Shari, Celebrity Fashion Designer is back and juggling being a new mom and a devoted wife. She's ready to take her brand B.L.O.W to new levels and has been accepted to showcase her brand in a High Profile Showing at New York Fashion Week. While things are looking up for Asia and her family, there is a stranger from her past that may be looking to come between her relationship? Will this stranger cause friction in Asia's happy committed relationship?

Former Minnesota Vikings Cheerleader turned Successful Atlanta Business Woman Mauve Costen joins the group due to her friendship with KL. She is the owner of Princess Mauve Cosmetics, PM Events & Ballie B Photography Production Studio, and various other business ventures that has put her in a position to live the high life. She joins to assist KL in planning the 1st Annual Perfection Fashion Week Atlanta. Her motto is to do what needs to be done to make some money and has no time for any antics or drama. While she has the right attitude and dedication some of the group doesn't have her strong business acumen and maybe a recipe for disaster. Will mauve be able to assist this group in making Atlanta a Fashion Capital or will the drama be too much?

More on Aussie Journal
Celebrity Fashion Stylist Sunshine joins the world of Atlanta Fashion and she is on a mission to launch her Sunshine Wig and Cosmetics Line. Known around the world for making national headlines for getting arrested for getting on a school bus to fight her daughter's classmate, she finds herself having to explain her past all while going through a custody battle. Will she be able to shed her bad past all while pushing to make herself a staple in the growing Fashion Community?

Jayvoughn Robertson joins the cast and is ready to make his House of Jae Amour Fashion Label a household name. In Columbus Ohio, he is a well-known designer and now he wants to make his mark on Atlanta and has been introduced to the circle by his good friend Nikko TooGood. Jae finds himself amid drama with his friend Nikko that may ultimately ruin their friendship in the process all while dealing with a troubled relationship that no one knows about. While creating a luxury Fashion House is his number one priority, will he succumb to the pressure of friendship and relationship issues or will he emerge as one of the top designers in the industry?

Shay McCray is a Fashion Influencer who is a big name in Atlanta's Social Scene. She is also the owner of Le' Shay Boutique inside of Creative Rizk Boutique as well as an accomplished Actress. When she crosses path with an old enemy Nikko Toogood from her past that is within the group, she may find herself trying to figure out if she wants to be a part of it at all.

Nikko Toogood is a newcomer who is a national Fashion Publicist who has a list of High Profile Celebrity Clients that he is helping to make their brands a household name. When he enters the group and realizes Shay McCray is a part of the group, he may have to explain his past. Will he allow the rumor's Shay is revealing about his past to tarnish his brand or will he fight to clear his name?

Yolanda King Johnson is a client of Nikko TooGood who is a true Self-Made entrepreneur. Helming herself as the First Boss Lady she owns several successful businesses with her most lucrative one being YKJ Fashion House. With issues she had with Nikko in the past, she has made amends and given him a second chance at working as her publicist. Will the two be able to work together this time to further her brand?

More on Aussie Journal
Adam Chris joins the group as a Fashion Stylist who has worked on numerous major set's from Netflix to Bet so his resume is very impressive. As well as being into fashion he runs a successful podcast self-titled Adam Chris where he gets all the latest tea and gossip. Will his outspoken personality be able to mesh well with this group?

Drew joins the group through a referral from former group member Jordan VaShawn. He is the owner of Drewtique an Online Boutique for women. Drew bring's his spicy Jamaican personality to the group and he does not hold back. Being the youngest and hot head of the group he is learning to just focus on building his brand but will he be able to overcome all the drama?

OMS TV  is the dominant Independent Creative brand for adults 18-34.  The network is available on Youtube accessible to 1.8 Billion viewers.